Steel Rollformed Products Ltd (SRP) has a range of acoustic solutions to assist architects and designers with achieving desired STC levels for wall partitioning and ceilings. The use of Steel Rollformed Products' industry-leading acoustic stud, specialised clips for battens and strapping, and the aid of an experienced technical team have proved to be invaluable on many multi-storey building projects throughout New Zealand and Australia.

SRP's acoustic stud ‘Whisperwall’ is a single resilient stud, measuring 92mm wide that can achieve an STC62 at the highest configuration (10mm + 13mm GIB linings per side), giving an overall finished wall width of 138mm. This solution is widely used in commercial and multi-storey residential builds such as OKLA Apartments in Albany, Auckland. For this project, the initial design used Double Stud and Staggered Stud walls for their internal partitions. To help save on cost and installation time while maintaining the desired STC levels, SRP suggested the use of Whisperwall which was taken up by the architects.

Where a higher STC is required, such as the inter-tenancy walls in the Antipodean Apartments on Auckland's waterfront, SRP liaised with Marshall Day Acoustic Engineers to reach an STC65 rating using 92mm double stud wall with special high-density insulation with double linings on each side. SRP also has a range of clips to mitigate sound transmission for various systems like wall strapping, suspended ceiling systems, and direct fix clips.

SRP's technical team was engaged to help assist in coming up with a solution for a project where larger ceilings in an apartment building were unable to use any rigid bracing due to a car park being above a floor of apartments, and the vibrations caused by the movement of cars above would transfer too much sound through the rigid K-bracing. With the engineer's input SRP was able to develop a ‘Stud Bridge Ceiling’ that used slotted deflection head track as perimeter channel and studs as ceiling battens. The slotted track used as a perimeter channel, allowed the studs to be screwed off into the track while also being able to maintain movement in that joint without ‘popping out’ a seismic event. This could achieve a span of 3.4m and could be extended out further if need be with the use of a wire hanger and custom suspension clip at the midspan.

SRP remains NZ owned and operated and are committed to providing high performance, high-value acoustic products to the New Zealand construction industry. With the 3-5 day lead time, SRP remains the favourite of contractors and construction companies throughout the nation. This is to certify that SRP Wall Products and associated componentry supplied by Steel Rollformed Products Ltd are designed to, and manufactured from, a compliant base material, to the relevant New Zealand / International Standards and to the relevant parts of the New Zealand Building Code.

In addition, all wall profiles manufactured by SRP meet the required BMT [Base Metal Thickness], strength and durability requirements. All wall component sizes and gauges manufactured by SRP are to precise specified requirements as established by design, and will not compromise structural integrity and/or fire/acoustic ratings of a relevant non-load bearing partition.

In particular SRP products are compliant as a minimum, with the following Codes, Standards and any referenced third party materials noted in this SRP Product Catalogue is current at the time of publication: 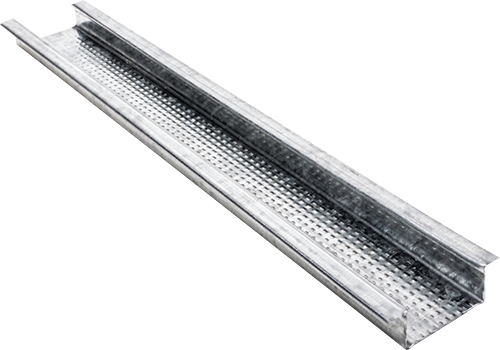 All SRP Ceiling Systems can be used to provide a base grid to fix GIB plasterboard, and to be the batten system in GIB Plasterboard Systems.

The selection of an SRP systems is determined by space requirements of the plenum vs internal room height.