John Willoughby of Medallion Developments made the decision to use pro clima SOLITEX MENTO 1000 connect Weather Resistive Barrier under his long run metal roofing, when building a mixed-use commercial development in Takanini recently. And like with many commercial buildings, a 3-degree low roof pitch was designed in, to maximise the interior space while staying within local height restrictions.

As he is planning to keep the building in his property portfolio, John was interested in using products and systems that were low risk, and offered superior durability, low maintenance and protection of his investment long term.

As we know too well, metal is a very thermally conductive material. Consequently, external moisture can easily condense on metal roofs on clear nights due to the ‘night sky radiation’ effect. This is where the surface (both topside and underside) of the material may drop down to 10°C below the actual ambient air temperature and this is why ice appears on the roof of cars on cloudless nights — even in Auckland. And once this moisture condensates on the underside of the roofing, it needs to either be drained off or dried off through air convection.

Along with death and taxes, another certainty in life is that water always runs downhill. And the lower the angle of the hill, the slower and more tortuous the path of the water becomes.

Low pitch metal roofs are at a higher risk of moisture problems occurring due to this fact. Moisture that condenses on the underside of the metal doesn’t have gravity on its side when it drains off and will collect in any low point along its path to the outside such as hollows in roof underlays between the roof framing. It is for this reason that pro clima recommends that a roof sarking be used for full support of underlay under ventilated roofs of less than 10 degrees, so moisture can escape from the roof build-up effectively.

Laps in the SOLITEX MENTO 1000 connect Weather Resistive Barrier were sealed by the ‘Connect’ self-adhesive strips built into the underlay, which ensures no moisture wicks up the laps to wet the substrate underneath, which is more likely to occur at low pitches. And as the MENTO 1000 connect is absorbent yet non-porous, and highly water resistant, the layer underneath is kept dry no matter how much condensation is running down its surface.

Pro clima TESCON NAIDECK sealing tape was used under the counter battens to seal all screw penetrations through the watertight pro clima SOLITEX MENTO 1000 connect roof underlay, which are at higher risk of becoming points of water ingress due to the low roof pitch. The continuous 20mm ventilated cavity running from the eaves to the ridge provides an uninterrupted drainage path to handle run off, as well as adequate air flow from low point to the high point to dry off moisture through air convection. John installed vermin proof venting strips at the eaves and at the parapet, just like you would see on a top vented wall cladding system.

Another benefit of the vented and drained ASV roof cavity system is that it provides a backup to deal with any potential roof leaks, and large amounts of moisture draining from the ASV cavity would be visible at the eaves. As John says, “If there’s a leak in the roof from one of the skylight and vent pipe penetrations, I want to know about it before it’s too late!”

Contact pro clima on 0800 PRO CLIMA or at [email protected] if you would like to know more about designing and building low pitch roofs the low-risk way. SOLITEX MENTO 1000 roof underlay is a three-layer roof underlay designed to be used with most typical roof cladding systems. While providing temporary weather protection it can remain exposed for up to 30 days.

SOLITEX MENTO 1000 has been appraised for use as a self-supporting roof underlay on buildings within the following scope:

In the opinion of BRANZ, SOLITEX MENTO 1000, if used, designed, installed and maintained in accordance with the statements and conditions of Appraisal No.876 (2014), will meet, or contribute to meeting the following provisions of the NZBC:

SOLITEX MENTO 1000 has been Appraised as an Alternative Solution in terms of the New Zealand Building Code Compliance. 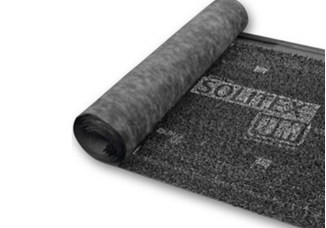 SOLITEX UM connect is a four-layered roofing underlay with a 3D separation layer and integrated self-adhesive strips for sheet joins.

Must be laid over plywood sarking.

SOLITEX MENTO UM, if used, designed, installed and maintained in accordance with the pro clima installation instructions , will meet, or contribute to meeting the following provisions of the NZBC: What is Above Sheathing Ventilation?