Forman has been involved in the realisation of a key property for GridAKL in Auckland’s Wynyard Quarter Innovation Precinct — a fast-growing waterfront neighbourhood. This striking character warehouse has been converted into a contemporary three level workplace which includes private studio spaces, expandable co-working pods, collaborative spaces, meeting rooms and shared amenities. Key features include floor to ceiling glazing, a three storey lobby and internal laneway along with exposed services, brickwork and structural systems.

Patricia Lai, Senior Interior Designer at Jasmax says they were originally going to retain the base build ceiling grids but replace the ceiling tiles with MDF veneered tiles. In the end, these proved to be too heavy for the suspension system which resulted in the need to find an alternative product. “To try and match to what was originally proposed, Elena suggested the Metalworks tiles and we opted for the standard white finish. By specifying different perforations we were able to retain the texture needed in these spaces,” she says.

The base building had already been designed and completed by the time Jasmax and Forman started and like many projects, they needed to ensure the built elements specified by the client met certain requirements, especially from an acoustic point of view.

“As part of the base building design, there were several double height spaces around the perimeter that continued up to the top tenancy. As our enclosed offices were situated around these areas, we needed to find a way to close these off whilst ensuring the view from the top remained aesthetically pleasing,” says Patricia. “It was determined quite early on in the process that the enclosed tenancies didn’t require a high acoustic rating, so we were able to specify Metalworks ceiling tiles with standard perforations for the majority of the spaces and tiles with micro perforations and a B15 backing for the tiles adjacent to dividing walls. The Metalworks tiles were a great alternative to the standard grid ceiling and tile which was a part of the base build offering.”

“This was a complex space to begin with,” says Elena Skhodtseva, Specification Manager at Forman Building Systems. “It takes a lot of communication back and forward to get the right solution and the final result ended up being quite different to what was originally proposed. It was an intricate installation — a big void in the middle of the building and the heritage listing meant installation was critical.” 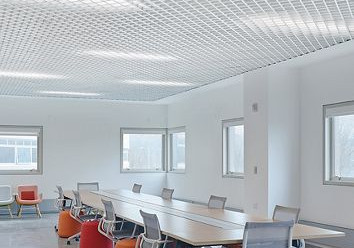 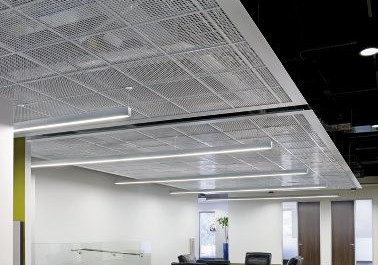