Porter’s Liquid Iron with Instant Rust was used to achieve a natural rusted metal look for the vineyard dining pavilion. While the interior was designed with a refined look and feel, designers Special Projects and Fraser Horton opted for a raw aesthetic for the exterior — recreating the look of rust. “The design is based on seeing shipping containers, sitting on farms, rusting away,” explains Fraser Horton, Fraser Horton Design. “It’s about that contrast between the raw, rustic and exposed, and refined details and elegance.”

To create the rust aesthetic, the design team initially considered sand blasting the containers to expose the metal, however soon discarded the idea as it would also leave the container walls unprotected. They found the perfect compromise with Porter’s Paints Liquid Iron, a finish that could create the same look, without affecting the weathertightness of the walls.

Care was taken in the application of the Porter’s Paints Liquid Iron to make the rust look as natural as possible. “With the Porter’s we made sure we painted in long vertical strokes to emphasise the idea that rust would be running down the container,” explains Horton. “We then applied an Instant Rust acid wash over that with the same vertical strokes to enhance the rusting look — emphasising that vertical streaking down, just as rain would fall down the container and create rust lines. That was unique.”

“With the paint and Instant Rust you get that variation where it’s quite natural looking,” adds Horton. “That was our main goal, to make it look as natural as possible, and quite imperfect, on that exterior skin.”

Painting the container was a meticulous process, but Horton notes that the Porter’s Paints products were easy to use. “It was straightforward to use and created a really natural effect that didn’t look contrived,” he says.

While initially reserved about recreating a rust aesthetic with paint, Horton is pleased with the natural look they achieved with Porter’s Paints Liquid Iron and Instant Rust. “It’s exceeded our expectations. It has the best of both worlds in terms of protecting the container from the elements, but also achieving the look we were after.” 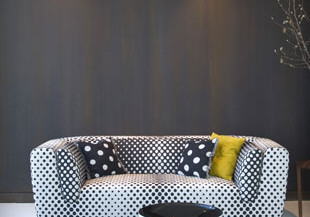 Porter's Liquid Iron and Instant Rust can be used in interior and exterior applications. Can be applied to most suitably prepared plasterboard, plaster, wood, plastic, metal, paper mache, masonry and previously painted surfaces.

Apply by brush only.