This article provides an overview of adhesive technology and the key properties of adhesive tapes typically used in construction. Adhesive tapes are used as bonding aids in a wide range of applications in the creation of airtight building envelopes. Several hundred metres of tape are often used on a single building! Adhesive tapes have become established as bonding agents for these applications (just as nails are the standard solution for timber structures). They have to fulfil their functions for a number of decades to ensure that the building in question fulfils the standards expected by the energy consultant and by the building client.

Aren’t all adhesive tapes the same?

Adhesive tapes might appear similar or even identical at first glance: when you compare different products, they all have a backing material. Depending on the planned application for the adhesive tape in question, this backing material may consist of paper, plastic film or fleece. An adhesive substance has been applied to the backing, and this adhesive substance is covered by a protective sheet or protective paper on the underside of the tape. The various types of backing facilitate different areas of application. For example, a tape that can be used both indoors and outdoors must have a UV-stabilised backing, an adhesive window-sealing tape must have a fleece backing that can be plastered over. The difference is easy to recognise. However, if you consider the adhesive substance itself, the difference is not so easy to identify. A review of datasheets is often of little help in this regard, as they generally only specify limited technical data — and this data is also difficult to compare.

Adhesive tapes for the creation of air-tightness are generally manufactured using two main production methods. The majority (around 80 – 85%) are produced as dispersion adhesives. In this process, acrylates dissolved in water are applied to the backing material in liquid state. Emulsifiers are added to the dispersion to ensure that the dispersion remains homogeneous and that the acrylates dissolve in water in the first place. The function of these emulsifiers is to attract water. The water is then evaporated in long drying tunnels later in the production process. The dissolved acrylates bond with one another, form long chains of molecules and become sticky as a result. The emulsifiers remain in the adhesive film, but no longer serve any purpose. A more exclusive group of adhesive tapes is manufactured using a solids-based adhesive containing pure acrylate. This production technology is relatively new and more laborious from an engineering viewpoint compared to the process used for adhesive tapes with acrylate dispersions. The adhesive is applied to the backing material in the form of a viscous mass and the individual acrylate molecules are cross-linked by the controlled addition of energy in such a way that the desired adhesive properties are created.

Honey and stone, or adhesion and cohesion 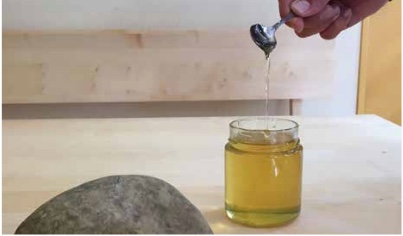 Adhesion and cohesion can be demonstrated very well by comparing runny honey with a stone. Honey exhibits good adhesion and sticks to surfaces very well as a result. However, its inner strength (cohesion) is so bad that it runs off in drops under the action of its own weight. A stone has high inner strength, i.e. cohesion, but very low adhesion. Good adhesion is generally associated with poor cohesion and vice versa. A good adhesive tape results from an ideal balance between cohesion and adhesion.

Why do adhesives stick? Sloths, squirrels and geckos

Let us consider the interesting question of how and why an adhesive tape is able to stick things together. The bond with the substrate is achieved using various mechanisms. Sheeting or a pane of glass may appear smooth at first glance, but their surfaces actually look very different — with hills and valleys — when viewed under magnification. The adhesive flows around these structures and claws to the surface like a squirrel on a tree or grips the surface like a sloth wrapped around a branch. If the adhesive is in direct contact with the surface, attractive forces — so called Van der Waals forces — will result between the two elements at a molecular level. The closer the adhesive comes to the surface, the more these forces will come into play and increase the strength of adhesion to the substrate. A similar principle applies with the gecko, which is able to walk upside-down on smooth surfaces such as panes of glass. This is made possible by the large number of very fine setae (hairs) on the feet of geckos, which increase the contact surface and thus facilitate sufficiently strong adhesive forces.

Take your time: the build-up of adhesive force

It can take some time before an adhesive has flowed into a subsurface fully and established a strong bond with it. Adhesive strength is generally built up over a period of hours. The reason that all manufacturers recommend that their adhesive tapes should be pressed into place can be explained by the mechanisms described above: an adhesive must be brought into close contact with a subsurface to be able to flow around and surround it.

Written by Jens Lüder Herms, Dipl.-Ing. (FH)
Jens trained as a carpenter and then studied construction engineering. He develops practical solutions for sealing buildings as part of research and development at pro clima.