Metalcraft Solar enabled the owners of this Karaka home to cleverly incorporate flexible solar strips into the design of their long-run steel roof. For many people, the aesthetic impact of conventional solar modules that are mounted on rails as an appendage to the roof can compromise the overall design value of their home. Solaflex provides an alternative that enhances, rather than compromises the overall look and feel of a home.

Solaflex is a range of flexible solar strips that bond directly to the surface of Metalcraft’s popular espan470 long run steel roof profile, rendering the solar array virtually invisible when installed on a dark colour roof. Metalcraft Solar is one of the only suppliers in New Zealand that stock this innovative product range, which presents one of the most integrated solar solutions in the market.

This product type utilises an alternative form of energy generation technology to Photovoltaic (PV) which is more common among conventional solar modules. Instead, Solaflex uses CIGS (Copper Indium Gallium Selenide). Solar cells made of this material are deposited as a very thin layer on the flexible backing strip which then has a coating of adhesive applied.

Because the material has a high absorption coefficient and strongly absorbs sunlight, a much thinner film is required than of other semiconductor materials. The efficiency of Solar Laminates is between 16-17% (depending on the product), whereas conventional panels are around 18-20%. However, CIGS technology is known to be more effective in flat pitch conditions, and in vertical application such as wall cladding.

The strips are durable enough to walk upon, and in comparison to conventional modules, they are significantly lighter, have less wind uplift resistance, and require no penetrations common to traditional panel mounting systems.

The recently released third generation of this product are 348mm in width, lengths vary according to wattage generation, a 290 watt module (5.91m), and a 125 watt module (2.56m).

Case Study: Mixed 125 & 290W with Hybrid Inverter and Batteries for a Karaka Home

The owner had enjoyed the benefits of a solar array on his previous home and was keen to incorporate solar into the design of his new home. Consequently, he was motivated to utilise as much of the available roof space to maximise generation.

The roof on this project was a Metalcraft espan470 roof that had multiple roof planes of varying length and orientation. Overall, eighteen 125 Watt and thirty 290 Watt strips were installed resulting in an 11.04kWp array. The 290W strips were positioned on the North facing roof, and the 125W strips were on the west roof. In the case of the west-facing roof, the strips were offset from centre to mitigate afternoon shade cast by the standing seams of the roofing.

All the cabling is concealed under the roof flashings which eliminates the need for any penetrations associated with the solar cabling, and ensures weather protection.

This rooftop array was also complemented by an innovative modular lithium-ion battery solution from BYD that consists of multiple 1.28kWh units that stack atop one another like a beehive. The output of the rooftop array was large enough to warrant a battery capacity of 11.52kWh.

The advantage of this modular battery system against other larger standalone battery solutions is that it can be expanded progressively over time if desired. This allows the homeowner to start with a modest battery capacity and then monitor the actual energy generation and consumption patterns collected by the monitoring software over a period of time so as to avoid over-investment in surplus battery capacity; this also allows clients to spread the capital investment over a period of time. 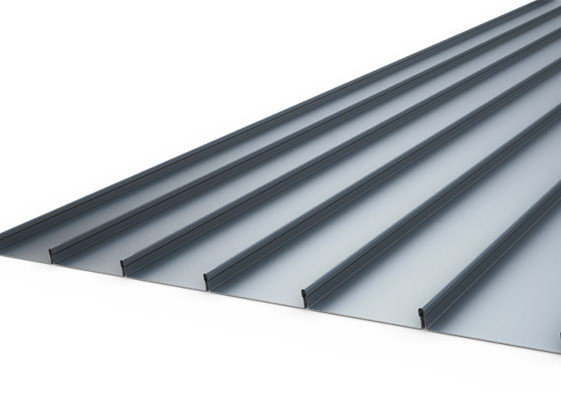 Espan® 470 is a Roofing and External Wall Cladding system comprised of a 49mm deep trough profiled steel sheet, along with associated design and installation information.

Metalcraft Roofing supply the Espan® 470 as a vertical external wall cladding, and on roofs with a defined minimum pitch of 3 degrees for use on commercial and residential buildings within the following scope:

If designed, installed and maintained in accordance with all Metalcraft Roofing requirements, the Espan® 470 Roofing and External Cladding system will comply with or contribute to compliance with the following provisions of the NZ Building Code: